Hello Weeeezards!
Ronan here with some thoughts on pvp and the new updates.
For those of you who dont know me, I love pvp and I love my pvp team.
I have been around for a while to watch pvp grow from good to better, and from balanced to unbalanced. In this post I will be talking about what I think current pvp problems are and what i think would fix these problems. I would also love a little feedback from anyone reading this. 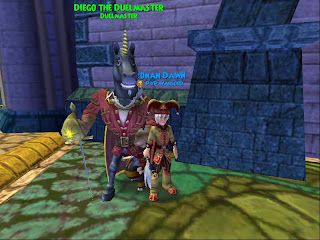 Here I bring up the first problem. Diego is always eager to talk about pvp tutorials and advanced combat, yet we have had warlords running around since the arena became the popular sport and our current gear offered from him falls short at the status of Commander gear. This gear was great for a long long time, but with the introduction of gargantuan, criticals, blocks, and insane healing boost percentages I feel this gear is obsolete. If you have been involved in the arena you know what i am talking about when i say the tickets we get for victorys and losses have little or no value after a certain point.
Pvp is about healthy competition, friendship, teamwork, strategy, relaxation, adrenaline rushes, pride ( lol), and an opportunity to put your hard working wizards and hard farmed gear to the test. These are all wonderful things, yet overtime I feel that an incentive to pvp has been lost.
PC ( our pvp team ) has seen fewer and fewer teams out there in ranked 4v4 and its gotten to the point where out last 20 matches in ranked have given rewards ranging from 0 rank per victory to 7 rank per victory. what does this mean? It means that there simply arent teams with high ranks competing anylonger. why? I dont know, maybe if KI introduced something to work for, something extra special to obtain through pvp successes we would see some of the old pvpers back at it.
Until then, I challenge you to get to the Arena! there is TONS of rank out there to be had. honestly the advantage is all yours. If you get ranked up against a full team of warlords you will not lose any rank if your beginners. you will simply have the opportunity to gain rank. about 26 or so ranking points can be won when a private beats a warlord. the benefits are still there for you if you havent started. I am here to talk about the brick wall our team is trying to smash through though. Bottom line... KI we need some Warlord gear. get the old warriors back into the arena and claim something great. claim Warlord gear, claim new tropheys, claim titles and arena ticket items that have not yet been introduced to W101. We have tickets, the demand is high, where is our supply? 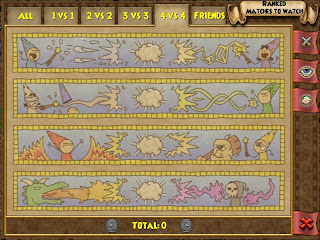 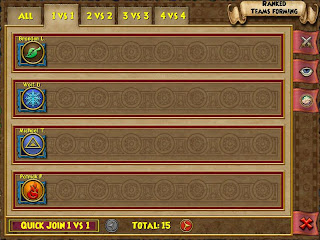 and this was the total 1v1 matches taking place on that same Friday. 15 matches!!!
KI has well over 10 million registered players and less than 100 people are in the arena??
dont get me wrong, W101 is a top rate game and my all time favorite. PVP has just been overlooked and there is not really an argument there.
Yes yes the WW ( waterworks) gear is lovely yet it lacks things true Warlord gear should provide.
for starters, Life, Death, and Balance wizards get 0% accuracy from the WW gear?
sure you could luck out and get a super nice pvp pet with sharp shot, proof, defy, spritely....but is that really making up for what our gear is lacking?
There were a few other things that kinda baffled me with these updates ( btw I love these updates, they were some of the best KI ever made. I am just here to focus on the PVP problems)
It is very interesting that some school not only got an increase in accuracy but their great accuracy changed from class specific acc. to universal acc. a fire hat that gave 8% fire accuracy before now gives 8% accuracy all the way around the table.
not only did balance, life, and death not get class accuracy but they are much much more likely to fizzle on a heal than the other wizards are.
Just think about this.
If 2 wizards were using the current WW gear to pvp, say a life were to vs a fire in 1v1.
say they both needed to heal because they beat eachother up. the life wizard would cast a satyr and have a 90% chance to succesfully heal themselves.
but the fire wizard will cast the spell from the life school, and his/her satyr will have somewhere around a 97%-104% chance to successfully cast the card.
Maybe i am just crazy but shouldt the Life wizard cast its own class spells more efficiently than a wizard of another class? It only makes sense....right?
Up next.....something that made me GASP! 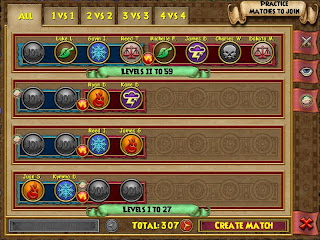 Looooook at the number of people in practice pvp!! 307 matches! some of these are 1v1 some are 4v4! that is a LOT more people than ranked has to offer! still low for a Friday night right? well guess what.... I took this picture at 4:47 am central time on a Sunday morning!
what does this mean? People LOVE pvp. Ranked has nothing to offer past commander gear.
How do we get KI to update pvp? simple! we go pvp!

These guys have the idea! get out there and pvp!
Posted by Ronan Dawn at 1:49 AM

Ronan Dawn
Yo yo yo spiral! My name is Ronan Dawn and I love wizard 101. I started playing shortly after beta test ended and have been here ever since happy to farm with friends, discover new things and get into some crazy pvp with TPC( team perfect catch). I have 7 wizards now. Ronan Dawn: lvl 60 balance. Ian Sun: lvl 60 Ice. Gabriel Heart: lvl 59 Death. Aaron Moonbane: lvl 60 myth. Isaiah: lvl 60 fire. Galen lionheart: lvl 60 life Cass Cloud: lvl 55 storm. After making all these wizards I feel inclined to create a blog and share my past, present and future experiences with the W101 community in hopes to help out...share news...discuss pvp strategies and have a few laughs! This is my first time blogging so I hope you enjoy as i learn to do this! :~) Ronan Dawn.